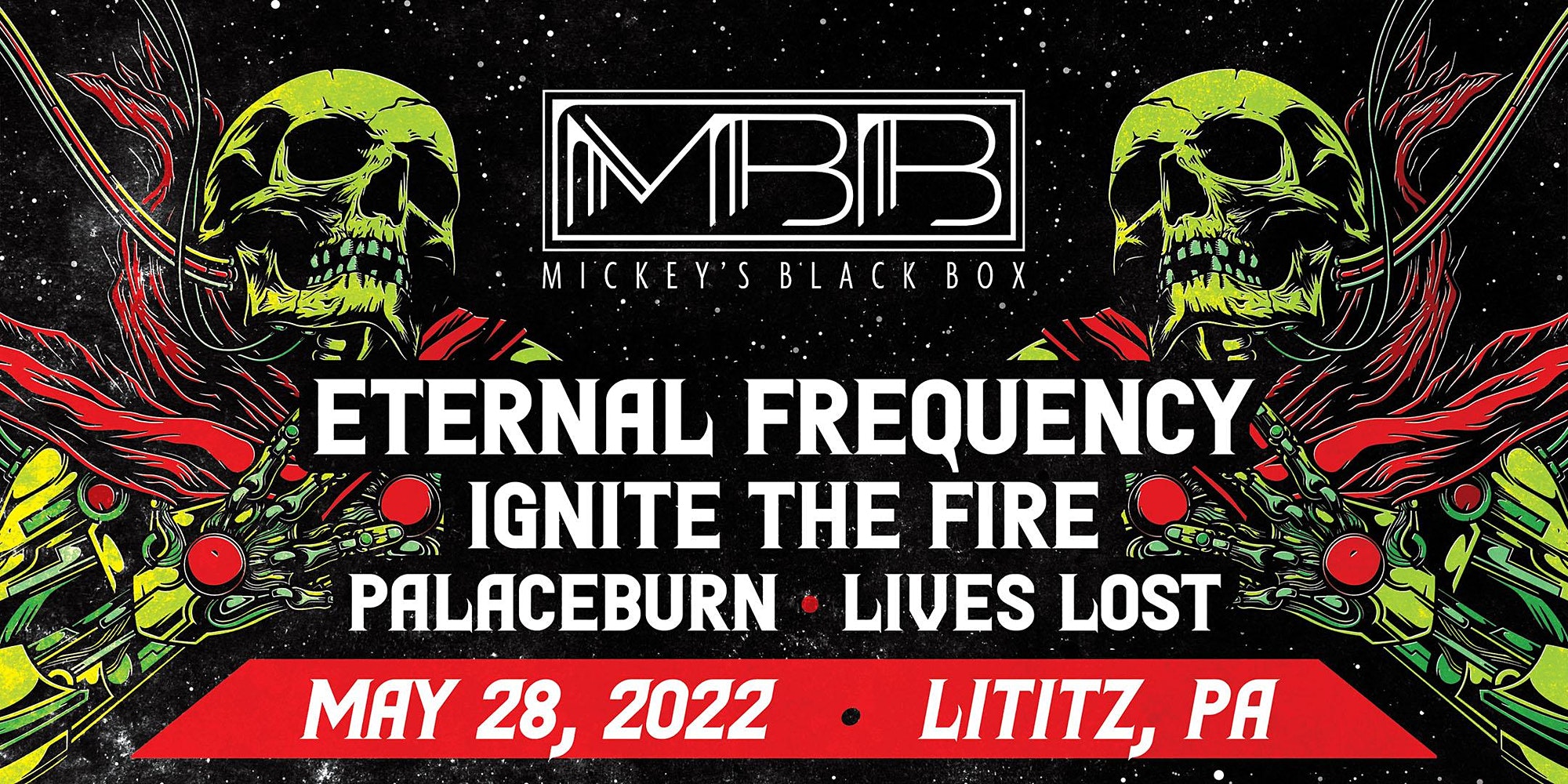 Local band night at Mickey’s Black Box with some of the best acts in the state!

Established in the early spring of 2018, Eternal Frequency is a five piece female fronted hard rock band based out of Central Pennsylvania following in the footsteps of acts such as Spriritbox, Halestorm, Evanescence and others. Blending influences of Metalcore, Hard rock, and Active Rock, Eternal Frequency brings a new energy that is also dominated by vocalist, songwriter, and frontwoman Emelle. In just under three years as a band they have released several studio singles as well as music videos including “Temptations”, “Parasite”, “What Are We Waiting For”, “Head Like A Hole”, and their very popular Queen cover “The Show Must Go On”(all proceeds going to NIVA – National Independent Venue Association) to the masses and have been reaping nothing but positive energy and reviews from their supporters. They have accrued a massively strong following in the Pennsylvania area and have garnered attention in multiple regional markets.

As far as accomplishments go they’ve had the pleasure of sharing the stage with established artists such as Of Mice & Men, Adelitas Way, FUEL, Smile Empty Soul, Vixen, and Sponge, For the Fallen Dreams, Awake At Last, Eyes Set to Kill (to name a few). They also took home the award for Best New Artist at the 2019 Central Pennsylvania Music Awards and had the pleasure to honor Halestorm (Inductees) with their rendition of “Familiar Taste of Poison” at the 2020 CPMA’s. In addition EF was nominated for Best Hard Rock Band and Song of the Year.

There may be no better time for an anthemic and powerful song of hope, and of being unstoppable, than right now… and that is the message behind Ignite The Fire’s newest single release, “Unstoppable”.

“It was really an introspective of how I was feeling at the time,” says Caelan Gregory, band drummer and lyricist. “Dealing with anxiety and depression, I wanted it be something where it is basically saying I can break through this. I am unstoppable.”

“My weakness, your throne; I’ll lay to waste.”

And he and the band are reaching out to others and asking them to answer the call of Unstoppable. Driven by a powerful and aggressive sound, as well as inspiring lyrics, the song captures a moment in time… and yet the message is actually timeless.

“Times are very difficult right now,” says singer Jack Gurecki. “People being out of a job. People being away from their loved ones. For those going through any kind of struggle, I feel that this song brings a message of hope, and being unwilling to give up.”

Mark Quinn, the band’s guitarist, describes the song as “breaking through the wall,” both literally and figuratively and from a societal and personal level. “Not just with what’s going on in the world today, but it can get you through the last mile of a marathon, through that last rep on the weight bench, or get hyped for that football game, or that hockey game, or just getting through a tough day on the job. It provides that emotional drive to propel you forward whatever obstacles you may face.”

“Show me what you’re worth; unleash the beast.”

Ignite the Fire is coming off the success of their single Echoes from their last album, Between Shadow and Solace, a song which was streamed over 200,000 times. Echoes was also added to Spotify’s influential editorial playlist, And Upon This Rock.

The Maryland band, which also includes guitarist Michael Nelson and bassist Holly Smith, was formed nearly a decade ago, and has touched countless lives with their message of hope and resilience. Their music has been played around the world from the United States to the United Kingdom, and from Australia to Brazil, and they have shared the stage with heavyweight bands including Three Days Grace, Bad Wolves, In this Moment, Theory of a Deadman, Pop Evil, Black Stone Cherry, 10 Years,among many others. The band’s music has also been streamed heavily on top digital platforms such as Spotify and Pandora, and Ignite The Fire has been named a ‘Band to Watch’ by both.

“’Unstoppable’ is yet another song that we hope will connect with and inspire those who hear it,” says Gregory. “And that message is needed now more than ever.”

Lives Lost is a Rock band made up of seasoned musicians Tanis Pellegrini (Lead Vocals/Guitars), Alan Thompson (Drums/Backing Vocals), Aaron Perry (Guitar) and Josh Krizan (Bass/Backing Vocals). A talented group, the band began in 2020, and have been writing vigorously ever since. Lives Lost is expecting an EP in Spring of 2022 with a full length record to follow.